The mined gold-bearing ore is processed at hydrometallurgical plants.

Hydrometallurgical plant №2 is the largest and leading hydrometallurgical plant of the company in terms of production indicators. There are carried out technological processes from grinding ore containing precious metals to obtaining finished products in the form of high-quality cast gold at this enterprise. 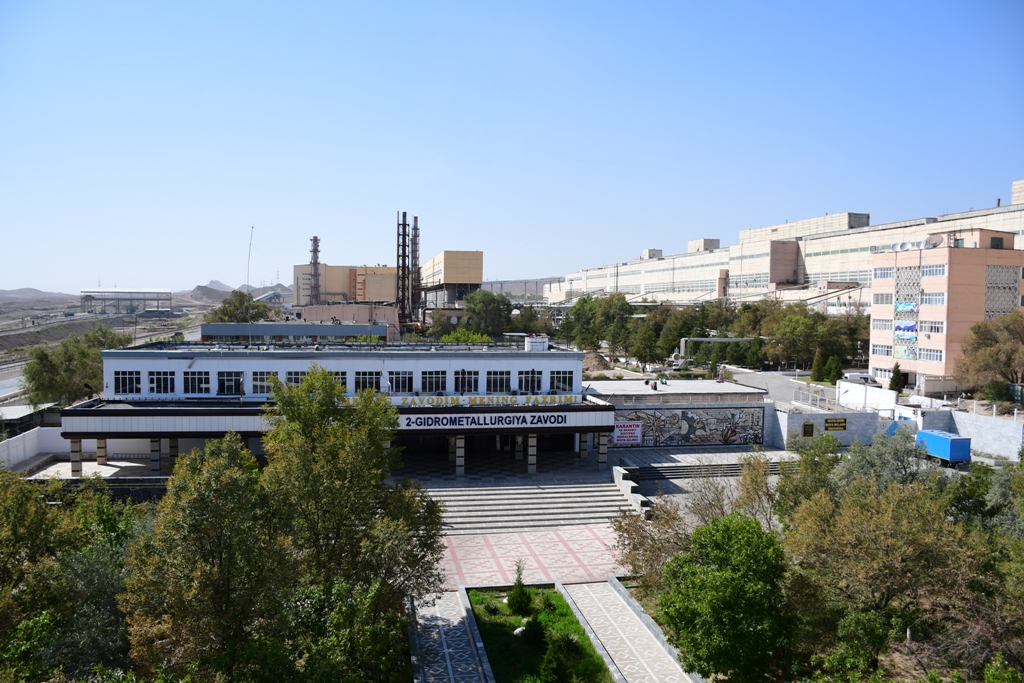 In 1967, the construction of HMP-2 was started. On July 21, 1969, a historic event took place – the plant produced the first gold ingot weighing 11 kilograms 820 grams from ore mined at the Muruntau mine. 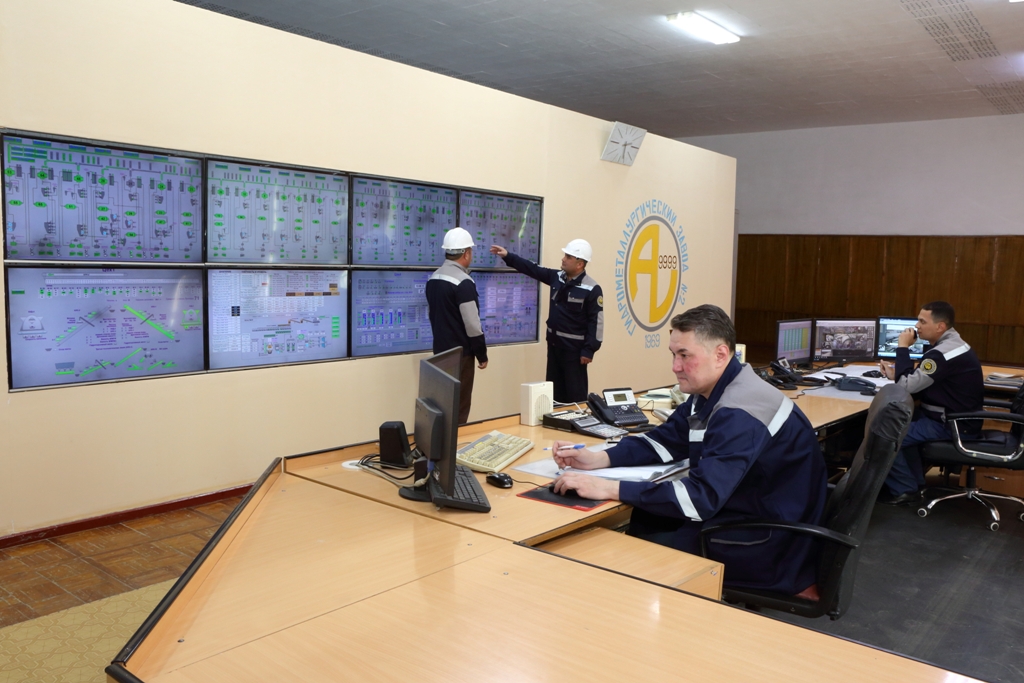 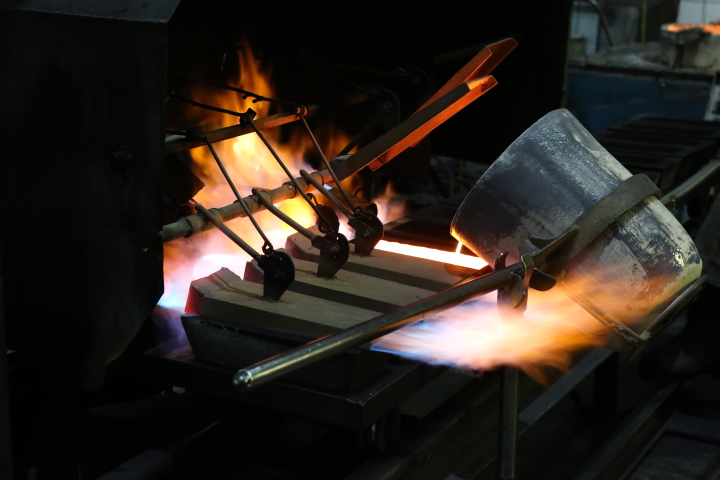 In order to localize the equipment used at HMP-2, as well as to establish the production of new types of localized products in 2019, the specialists of the company were entrusted with the task of developing a mill with a drum volume of 140 cubic meters. This mill, manufactured at the Navoi machine-building plant, is the first step towards the development of heavy machine-building in Uzbekistan. As a result of the production in the republic of the first such unique technological equipment weighing more than 580 tons, savings in foreign currency were achieved in the amount of more than $ 2 million.

Unique technology, giant plant, high-quality products – all this would be impossible without dedicated, qualified and experienced specialists – the main asset of the enterprise. Today Hydrometallurgical plant №2 is a well-coordinated team of like-minded people who successfully cope with the tasks set. Currently, more than 3.3 thousand people employ at HMP-2. 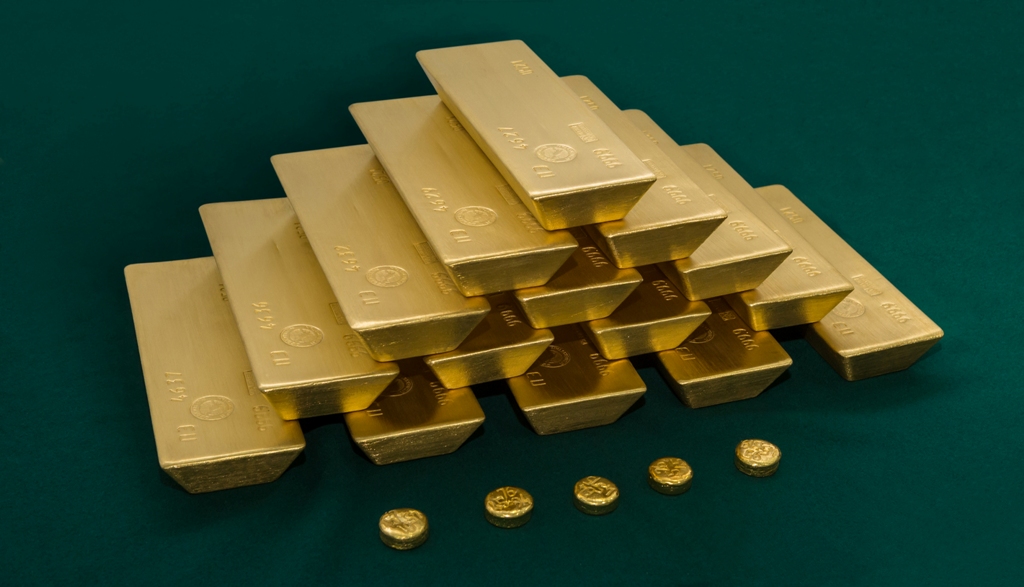 The mark “999.9” on gold bars of NMMC produced at HMP-2 has become the brand of Uzbekistan on the world exchanges of precious metals. The London Bullion Metals Association awarded the gold of the company with the status of Good Delivery, and it was also certified at the Tokyo Industrial Commodities Exchange.

On March 28, 2017, during the visit of the President of the Republic of Uzbekistan Shavkat Mirziyoyev to Navoi region the construction of Hydrometallurgical plant №5 of Navoi Mining and Metallurgical Company was started. In 2021, the construction of the plant with a processing capacity of 5 million tons of sulfide and oxide ore per year was completed on the basis of the Auminzo-Amantoy mine.

The uniqueness of the plant is that it uses a completely new technology that has no analogues in the world, namely the technology of gold extraction based on oxygen-lime oxidation. The production processes at the plant are fully automated, a digital production system has been created. Also, the enterprise has introduced a process of fine grinding of flotation concentrate, which makes it possible to achieve the opening of a finely disseminated gold-containing product to improve the hydrometallurgy process. 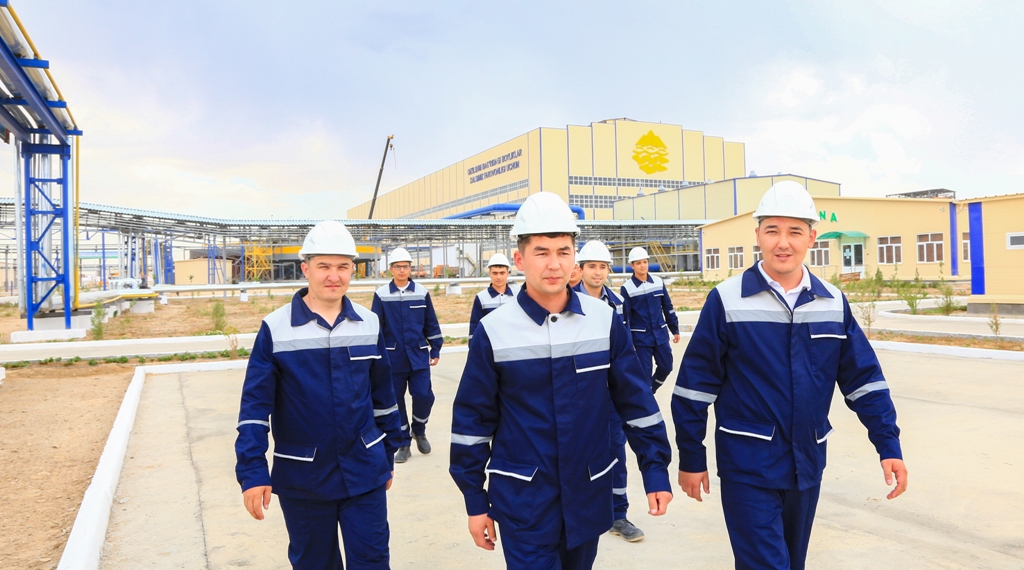 In order to create favorable conditions for employees of HMP-5, a working township for 2.5 thousand people was built.

As is known, the composition of the ore is rich or poor in precious metals. High-grade ore is processed at enterprises, and ore with a low metal content (off-balance) is collected in specially organized dumps at industrial sites for further widespread use.

Along with solving the issue of choosing a technology and processing the processed ores formed at the mine “Unit of heap leaching of gold” in the period from 1996 to 2006 by the method of heap leaching, the problems of the ecological nature of the region requiring waste disposal were resolved. 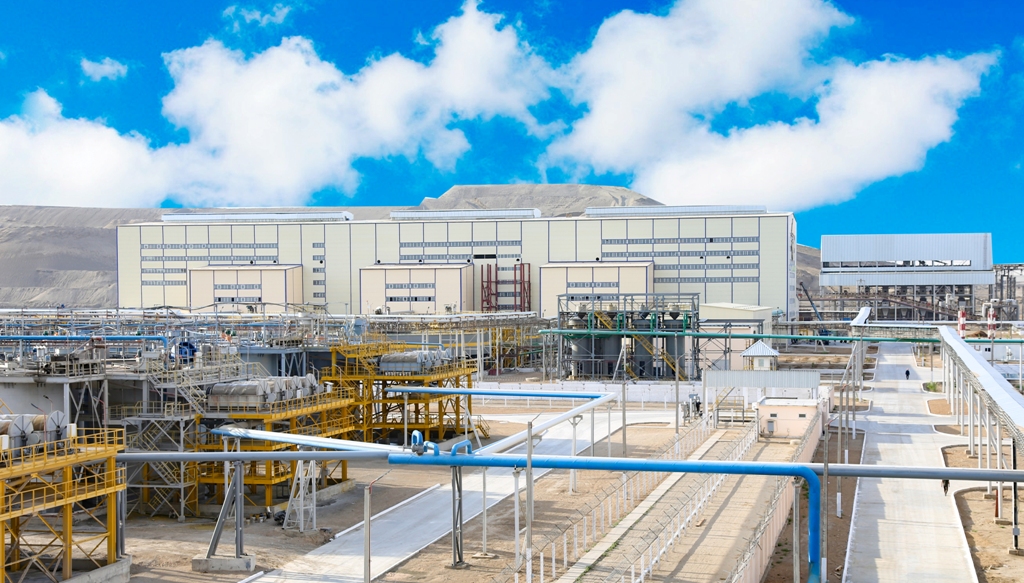 Within the framework of the program for development of NMMC until 2026, approved by the President of the Republic of Uzbekistan Shavkat Mirziyoyev, one of the major investment projects is Hydrometallurgical plant-7, which allows 15 million tons of technogenic waste per year. 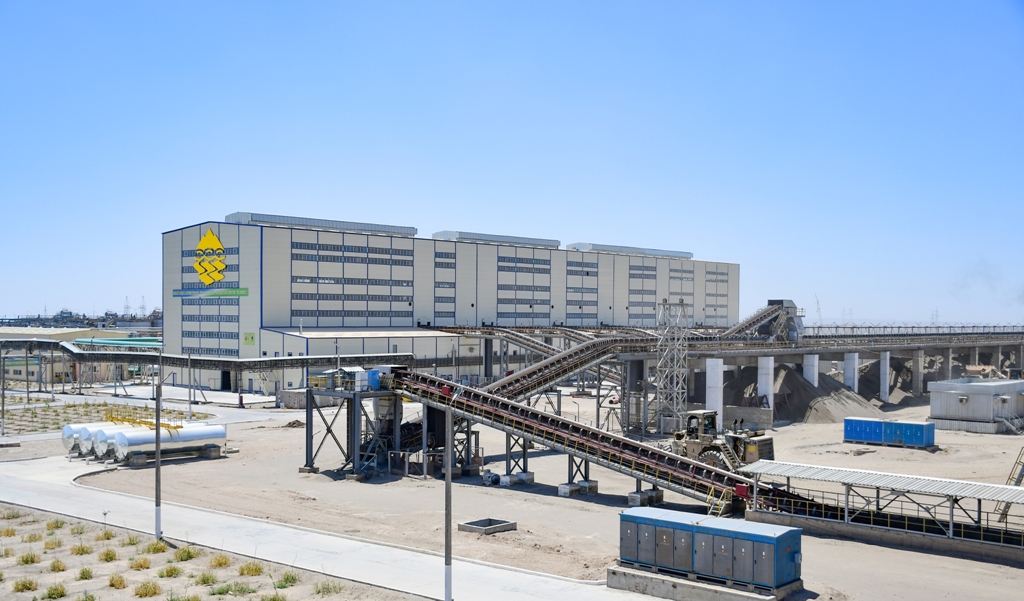 One of the important aspects of processing technogenic waste is the absence of costs for the extraction and transportation of ore, which significantly reduce the cost of products at HMP-7. The uniqueness of this production along with its technology allows it to be competitive in the world precious metals market.

Since then, NMMC's specialists have succeeded in building this plant, launching six mill blocks for processing ore at several stages of the project, and most importantly, completing the project ahead of schedule. Since 2020, the plant began to produce products. It should be noted that during the commissioning period in 2020, more than 3.3 million tons of technogenic waste were processed to obtain finished products. 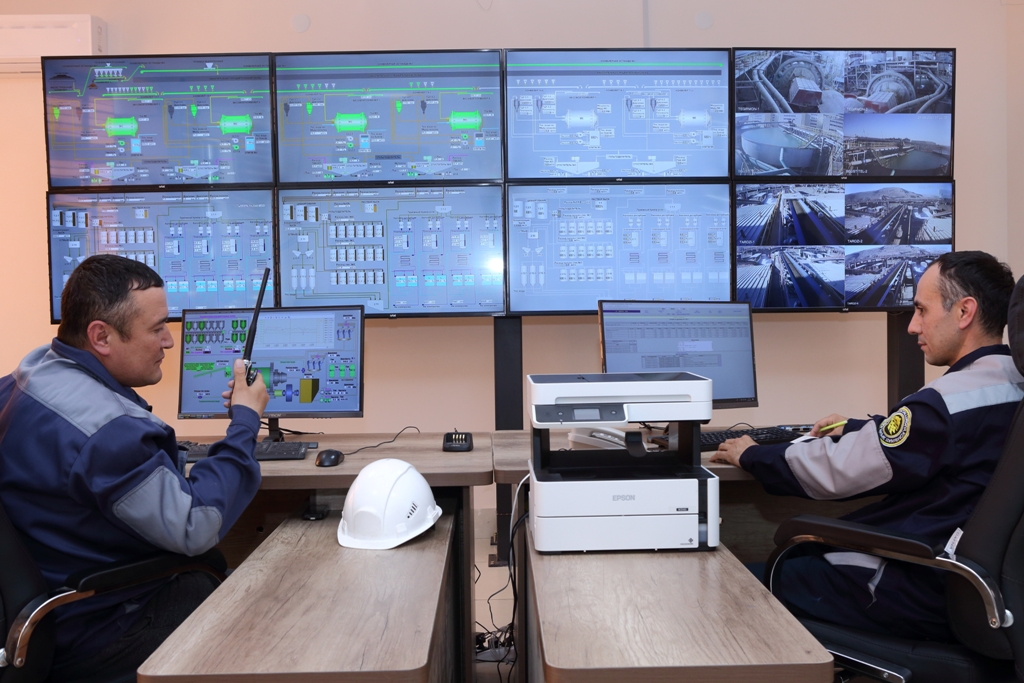 For today more than a thousand new work places have been created, young specialists have been hired, mainly graduates of the Navoi state mining institute.

Hydrometallurgical plant №3 is the first largest enterprise in the mining and metallurgical industry, built and put into operation in the first years of independence of the Republic of Uzbekistan. From 1995 to 2008, the plant processed oxidized ores from the Kokpatas and Daugyztau mines.

In subsequent years, due to the reduction in the reserves of oxidized ores, new technological complexes for the processing of sulphide ores were erected. 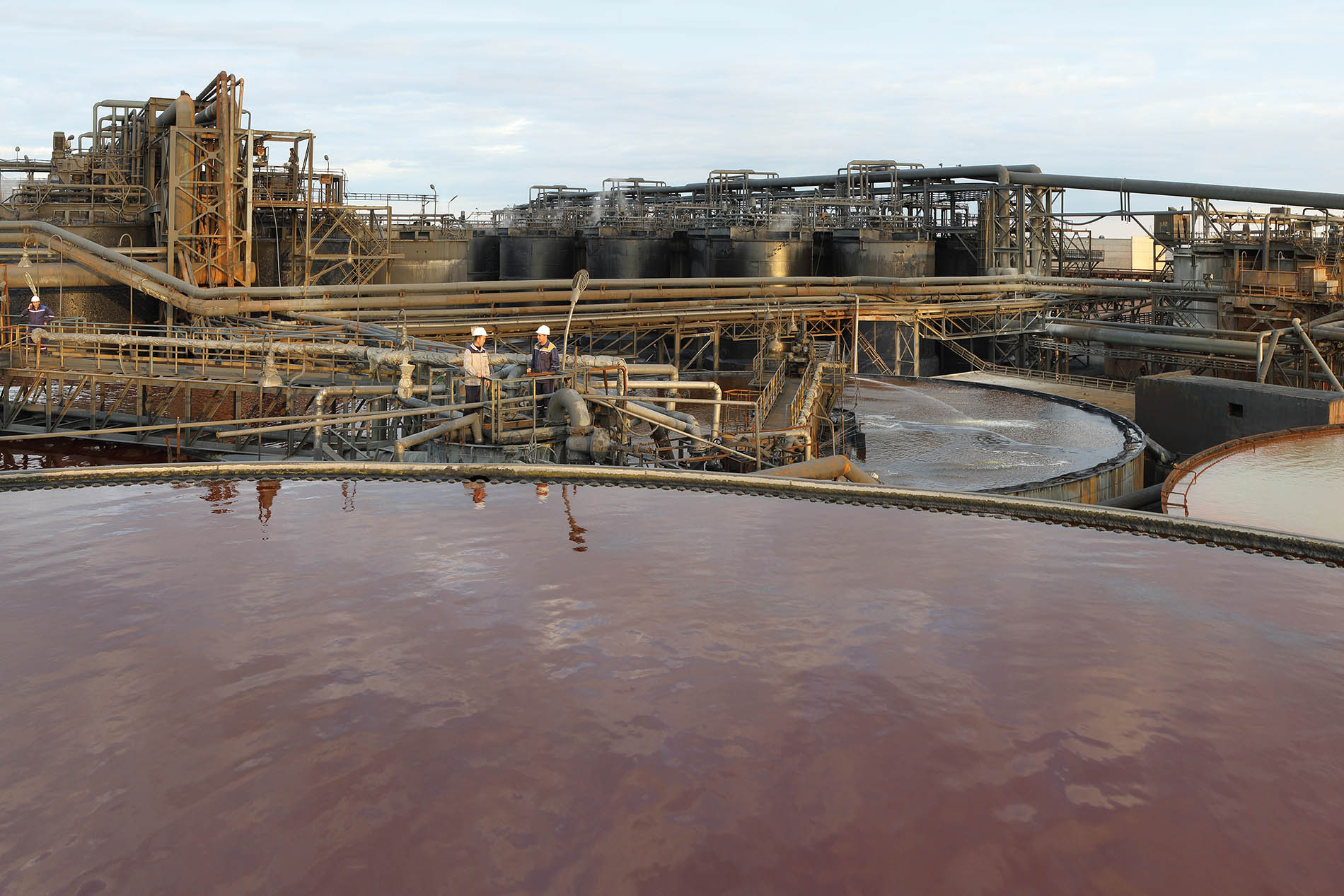 In 2008, the first stage of the new complex was launched, which opened a new page in the history of the plant. The new processing complex consisted of the redistribution of flotation concentration of sulfide ores, biooxidation of flotation concentrate and sorption of the finished product of the biooxidation process. The introduction of a new biooxidation technology has made it possible to significantly expand the raw material base of hydrometallurgical production. In addition, it made it possible to reduce capital investment and electricity consumption for gold production without harming the environment.

In 2009, a modern complex for sorption cyanidation of a biooxidation product was put into operation using the KEMIX technology. In 2010, new schemes of inter-cycle flotation were introduced in the flotation unit, which together with the optimization of the reagent mode, made it possible to increase the metal recovery in the flotation concentrate from 72% to 82%. Thanks to the launch of a new complex for the processing of refractory sulfide ores, the volume of production of finished products in 2009-2010 increased by 40-50% in comparison with 2007. By 2010, the volume of sulphide ore processing was increased to 4 million tons per year.

The second stage of this complex was successfully put into operation in 2011. In the same year, sulphide processing at the plant increased by 27% and gold production by 35% compared to two years earlier.

In 2012, the sorption technology was transferred to a new type of sorbent - absorbent carbon. For the subsequent processing of absorbent carbon at HMP-3, the construction and commissioning of a desorption, electrolysis and coal reactivation unit was completed in the shortest possible time. The introduction of the technology of coal sorption made it possible to increase the degree of extraction in the sorption process up to 80%.

NMMC's specialists have developed a fundamentally new and unique technology that allows processing substandard waste products of gold production and additional extraction of additional gold from it.

In 2017, for the first time in the history of mining and metallurgical industry of the Republic of Uzbekistan, specialists of Navoi Mining and Metallurgical Company were awarded the Gold medal of the World Intellectual Property Organization (WIPO) of the United Nations for the development and implementation of the “Method for extracting gold from refractory sulfide gold-arsenic ores”. 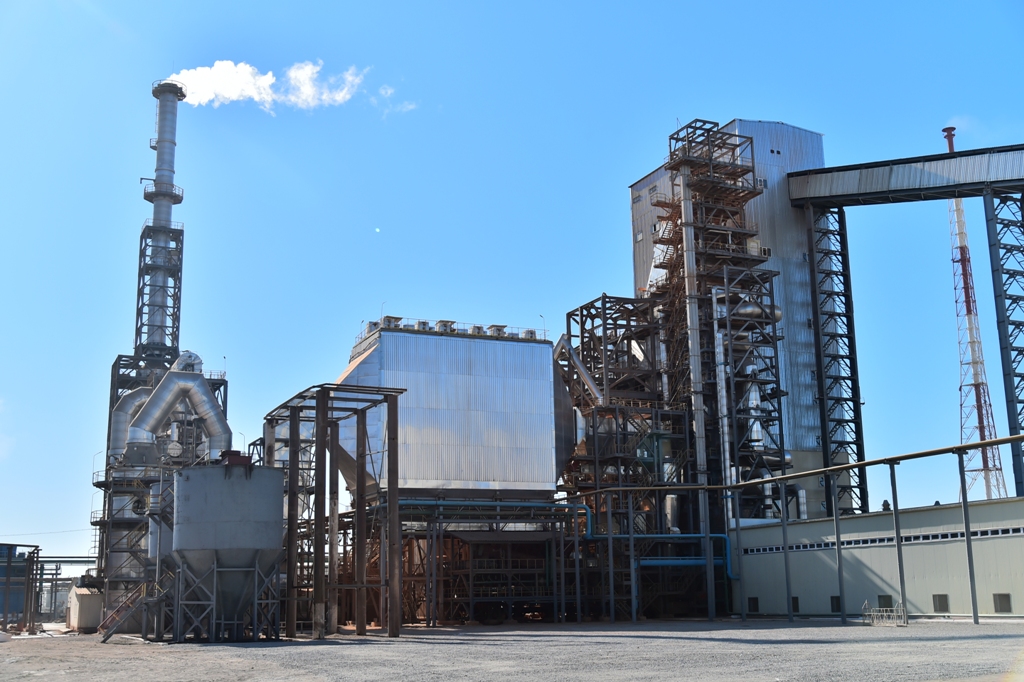 So, in 2019, there was implemented the investment project “Improvement of the technology for extracting gold from sulfide ores of the Kokpatas and Daugiztau deposits” at Hydrometallurgical plant №3. Within the framework of this project, a new filtration, drying and firing complex was built and put into operation, designed for processing the tailings of the plant. An important aspect of this project was high productivity, energy efficiency, a multi-stage exhaust gas cleaning system in accordance with modern environmental requirements, as well as a fully automated process control system.

The specialists of NMMC together with the specialists of the company Engineering Dobersek GmbH received an international German patent for the equipment used in the new technological process. The new project made it possible to increase the full utilization of natural resources and reduce the cost of production, while the amount of gold losses with production wastes was halved. In general, in comparison with 1995, the annual productivity of the ore processing plant increased more than 6 times, the production of gold in semi-finished products increased 5 times.

Hydrometallurgical plant №4 is one of the modern enterprises of Navoi Mining and Metallurgical Company. The construction of the plant began in 2009 in Zarkent township of Kushrabat district of Samarkand region. As a result of well-coordinated actions of the company’s collective, the plant was built in a record time – in 11 months and put into operation in August 2010. In 2010-2020, through the efforts of highly qualified and experienced specialists of the company, the productivity of the plant was increased from 1.8 million to 2 million tons of processed ore per year, the recovery rate of the useful component is maintained at 92.2-92.3%. Since then, the enterprise has processed more than 20 million tons of ore mined at the Zarmitan and Guzhumsay underground mines. According to geological studies, the reserves of the Zarmitan gold ore deposit will allow the plant to operate stably until 2070. The technological scheme and technical equipment of HMP-4 has no analogues in the whole of Central Asia, since the plant uses equipment and technologies of leading foreign companies and enterprises for the extraction of gold.

During the years of independence of our country, great changes have taken place at Hydrometallurgical plant №1. The plant was originally built to mine uranium and produce uranium oxide. Over the years, new enrichment technologies have been applied here. New technological lines were built, the volumes of ore and solutions processing were constantly increasing. 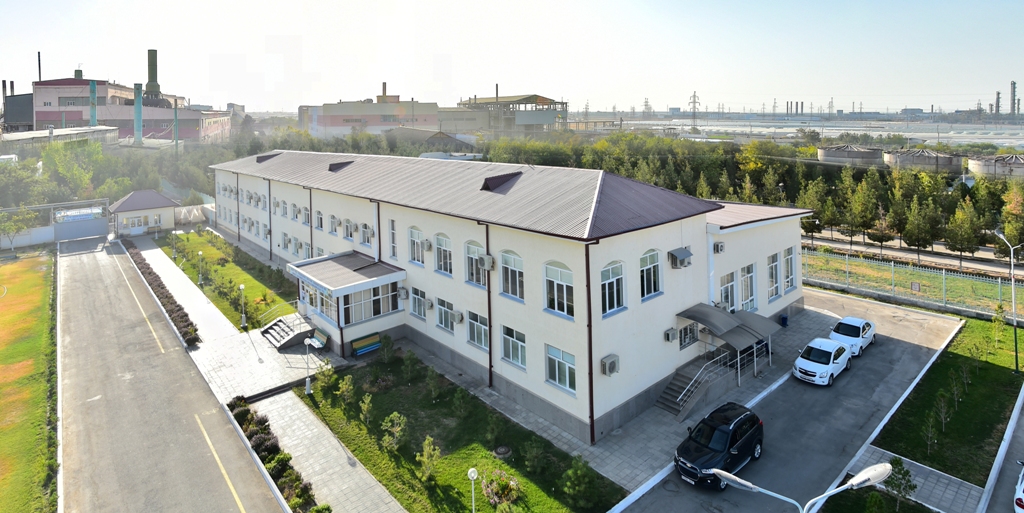 In 1994, the technological scheme was simplified in connection with the transition of the plant to the processing of products using the technology of underground leaching of uranium. As a result, the equipment for grinding ore and sorption-cyanidation was released. On the basis of these production areas, the processing of off-balance gold ore from the Muruntau mine began. Thus, the plant, in addition to uranium, began to produce semi-finished gold. The phased commissioning of regrind mills made it possible to increase the volume of ore processed in the period from 1994 to 2020 from 60 to 170 tons per hour.

In 1995-1997, on the basis of the production areas of the classification building, vacated as a result of the reconstruction of the uranium production, an installation for the production of liquid sodium glass was installed and put into operation.

In 1999, the modernization was carried out and the installation was put into operation for the production of molding sand from the foundry waste of Navoi machine-building plant. In 2000, on the basis of the installation for the recovery of foundry waste, the production of filter sand for filtering water treatment plants, which were previously imported, was launched. The section for processing quartz sand was reequipped for processing gold-bearing ores, as a result of which it was possible to increase the processing capacity of ore to 185 tons per hour. Also, a technological scheme was put into operation for the processing of refractory sulfide ores of the Karakutan mine using flotation and sorption technology.

The reconstruction and modernization of ore preparation equipment carried out in 2019-2020 made it possible to increase the volume of processed gold ore by 4 times, and the production of semi-finished gold by 5 times in 2020 compared to 1994. For the gold mining complex of NMMC, Mining Administration “HMP-1” is a kind of testing ground for the development, testing and implementation of breakthrough and progressive technologies in production. 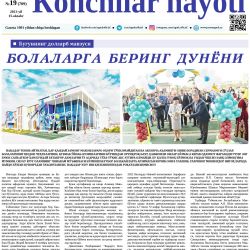 The results of NMMC’s activities over the past nine months